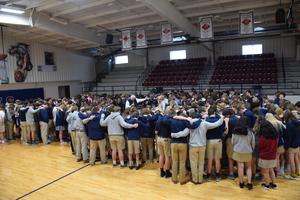 Our family came together this week to surround Coach Scott Blaylock and his own family as he prepares for a long awaited kidney transplant later this month. Scott's journey to this point began in 2008 when he was diagnosed with IgA nephropathy, an autoimmune disease that can cause the kidneys to be unable to filter waste from blood. As a member of the National Guard and serving on the Active Guard Reserve, he was preparing to go to Iraq with his unit Bravo Battery 2-114 field artillery when he had an unusually high blood pressure reading. He was sent for a kidney biopsy, and it was then that he would receive this news and change his world forever. He was determined to serve his country, and did so with only 50 percent kidney function. The tour took a toll on his body and he returned home. He was medically retired in 2015 and promoted to sgt. first class.
Now what? He and his wife Tasha, along with their two children Miller and Miles, endured the transition from the military life. He decided to continue his education and become a teacher. Tasha was also teaching so their schedules were the same. Scott would continue to decline and face several more challenges along the way. He eventually had to begin dyalisis and continues doing this four times a week. Tasha is able to do this at home for him and he has been patiently waiting for the call. Right before Christmas, Scott received the best present ever - a call with a perfect match! The appointments and phone calls began. Pre-op has been completed, and Scott and his family are anxious for the big day!
As a school family, we are collecting a LOVE offering for Scott and his family. Donations can be accepted in the high school office. Please make checks to Scott Blaylock. #NJASAF (Not Just A School, A Family)